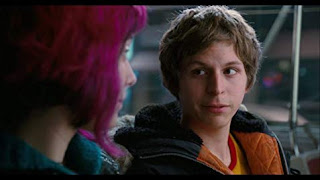 Scott Pilgrim is the main protagonist of comedy-comic book-style film Scott Pilgrim vs. The World. The film is based on the graphic novel of the same name and follows Scott battling off the 7 exes of Ramona Flowers to win her love.
Scott’s character is an awkward nerd-type but with unintentional wit. We can tell this physically because he wears t-shirts with references to arcade games. He also uses Pacman as a reference in a pickup-line. This all gives us the idea of what his interests are. Also, from seeing his flat where he lives with his flatmate, we know he is not a very well-kept person. The flat isn’t messy but isn’t tidy either, and isn’t very well-decorated. This gives the viewers the sense that Scott is focused more on his hobbies and friends than his physical appearance and his apartment.
Scott also is softly and quickly spoken. From this we can see that Scott is perhaps a quite nervous person. We especially see this in the scene of Scott and Ramona’s second date, where he gets nervous about how his hair looks. So we can see that he gets self-conscious in front of the girl he likes, but is otherwise unbothered. Also worth noting, is how Scott has letter magnets on their fridge. This suggests that there is a childish side to Scott, which further supports the idea that he’s not well-kept.
This character is achieved through both scripting and costume/ set design. These three elements of the film are key to developing the characters. If Scott were to wear suits throughout the film, this would really be jarring for the viewer and it would really stand out among the other characters. We would be thinking he is more of a dominant/ professional character, but this doesn’t fit with the script and Scott’s actions. This shows how important costume is, and how we are influenced in our judgement by what the character is wearing. 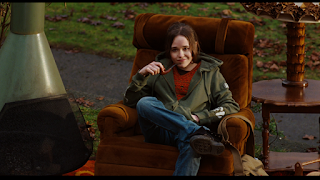 Juno from the film Juno is played by Ellen Page. Juno follows the story of a girl going through teen pregnancy and the development of her relationship with the father and the adoptive parents of the baby. It also showcases her change in outlook of the situation, as she begins with a view that all she needs to do is give birth and the situation is solved, but she slowly learns the impact that it’s having on the people’s lives around her.
She is a confident character with an air of teen angst and lack of education about what she’s going through. She has moments of maturity about her, but her ‘sense of humour’ as described by her dad in general makes her seem immature. Her costume could be described as tomboy, which suits her nonchalant character, as she doesn’t put much effort into her appearance. She always wears her hair tied up, which also adds to the idea of her being a tomboy. There isn’t a particular set that is associated with Juno like there is in SPvsTW except for her room where we are mostly focused on her on the phone, whereas Scott’s flat is actually introduced to the viewer. This fits more into the comic book style of SPvsTW, but we also only really see Juno’s room in the background of shots and we don’t have much of an establishment. Juno’s character is much more revolved around her scripting than her physical traits and surroundings.

For Deadline, I’ll be focusing more on the physical traits of the characters, as the film is short, it’ll be difficult to really get their character into the script. This isn’t to say that I won’t, I will just be prioritising character development within visuals.

The Informer Trailer: Joel Kinnaman Returns to Prison for a Good Cause

What is bitrate? – Videomaker