On 07.11.19, myself and Esme carried out a preliminary location recce in various towns along the Kent coast: Sheerness-on-sea, Whitstable, and Herne Bay. We wanted to explore these possible locations for set ideas and to also bring up ideas for the script.

Before we chose where we wanted to explore, I researched these towns among others to get an idea of local amenities that we would need for the practical side of a shoot. I also looked at Reculver, Margate, and Broadstairs initially.

We left out Reculver as it was a very small town with not much that we could make a point of filming. Margate and Broadstairs were too far from where we are based in Gillingham and train/ travel costs would have racked up.
We mainly paid attention to Airbnb’s and hotels as this would be key especially for a place for actors to stay but also a base from where the crew could store equipment, cook and supply hot food and a place to keep warm during breaks, and also crew to stay in the evenings. We’ve found this process useful in the past. It also helps to have one key place where the actors and crew can debrief, run through the script, and go over technical issues without causing obstruction to any members of the public.

We found that Sheerness only had one or 2 Airbnbs but there were a few options for hotels. The Airbnbs were also quite expensive for what they were at around £130/night, however there were hotel rooms for £40/night. A train ticket from Gillingham was £8.40pppd.

Whitstable, as a gentrified town, had a lot more options for hotels, Airbnbs, and restaurants. This is clearly to cater to the higher amount of tourists in the area since Whitstable boasts pebble beaches, trinket shops and floral alleys.

However, this all comes at a price. Hotels were around £70/night, and Airbnbs were about £150/night. This was quite high for our budget especially with boarding being more necessary, as Whitstable is further from Gillingham. A return train ticket would be £12pppd from Gillingham taking only 30 minutes, but this would be for 4 members of crew, also needing to carry the equipment everyday, and not taking into account that actors would also have to travel potentially from locations even further away.

Lastly, Herne Bay had a Premier Inn that would cost £52/night, and Airbnbs at between £70-100/night. This was much more within budget. Train tickets were £12pppd.

Our first location was Sheerness. Sheerness was the least gentrified of the three and much of what once represented a seaside town was dilapidated if not fallen to disrepair. Visible from the flood wall were these military lines buildings facing out to the mouth of the river. The center building was built to look like a large house, but once had guns mounted.

Further down the wall was a rubbish dump and the sound of some kind of construction site. Very representative of the mood of Sheerness as a whole.

From the wall we then ventured down the highstreet. Alongside amenities were mostly charity shops, nail bars and some junk shops. Nearer the water was a closed Amusement building that appeared to be a small Arcade and bowling alley. There was also the colourful clock tower in the middle of the highstreet.
Overall, Sheerness wasn’t a particularly nice place to visit but we liked it as a location. I liked the floodwall as it was backdropped with the grey river mouth and the abandoned buildings. However, we didn’t feel there was enough there to make going here to film particularly worthwhile.

The second destination was Whitstable. Whitstable was very gentrified but had a limited pebble and sand beach with not much to do in terms of arcades. The key draw to the highstreet was the shopping as they had a lot of independent stores styled around Scandinavian homewares and clothing. 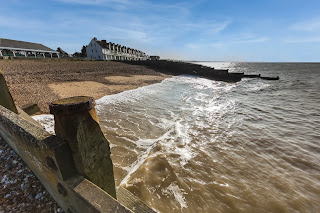 The beach was nice but small and interrupted in the middle by the dockyard.

There is honestly not much I can write about Whitstable. It was a pleasant seaside town, but we far from loved it as a location. There was not enough that we could make the most of, as well as it being too nice for a gritty drama film.

Spoiler alert! This is where we decided to film. Here’s why…

Our first sight of the beach was this helter skelter. It stood above everything at the end of the Herne Bay Pier, which also held a bandstand, a row of beach hut mini shops, and a few different food stalls. Most of which were closed on the day we visited due to it being a cold November day, but this also added to a sense that Herne Bay’s hayday was long since past. Although that sounds like a negative, it was a positive for us. 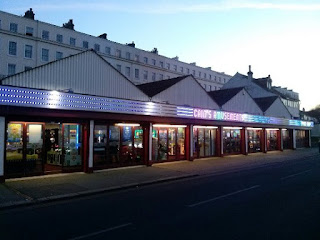 Cain’s Amusements was also a feature of the seafront that we explored. I am interested in an arcade scene or montage in the script mostly because of the striking visuals and lighting, but of course this would require permission. 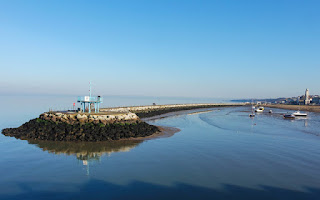 The Neptune Arm was also interesting as it meant that you could view the pier and the waterfront at the same time. This could also be used as a way to represent that Rob, the son character, is feeling distant from his father. 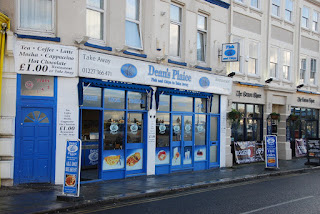 Finally, this is Dean’s Plaice, a fish and chip shop that we stopped at for our dinner. Speaking to the manager, she revealed that the shop had been approached and was going to be used as a filming location in January. She also mentioned that there seemed to be filming happening most days in Herne Bay, which made us feel a sense of relief that if other production groups had been given permission to film, then we may be in luck too. I’ve also taken note that could potentially approach Dean’s Plaice as a location to film too, as the people in there were very friendly, and the fact that they have a group filming with them already might mean that we could use that to our advantage.

Overall this was a successful day. We now have an idea of where we can work and what will be available to us. We still need to go back and have a more in-depth recce just of Herne Bay to check out more specific locations and potentially approach some places for permission or host any meetings that any places may want to have.

The 355 Trailer: Chastain, Nyong’o and Cruz Team Up in Spy Thriller

Mank Trailer: Gary Oldman Is a Writer on the Edge in David Fincher Netflix Pic