Somers Town is a comedy-drama set in Somers Town, London, directed by Shane Meadows and produced by Barnaby Spurrier. The film follows Tomo (Thomas Turgoose) and Marek (Piotr Jagiello) and the growth of their friendship over the course of a few days. Tomo is a runaway from Nottingham and Marek is a Polish immigrant who lives with his father who drinks too much.

Somers Town is one of Meadows’ feature films. His filmography also includes another inspiration for this project This is England. I’ll be looking into Meadows’ work in a lot more detail in a separate post.

For this production, he opted Paul Fraser as his writer.

Fraser is often writer for Meadows’ projects, as they have been friends since childhood. His other works include Once Upon a Time in the Midlands and Heartlands. In time that he isn’t writing, he is advising on scripts and gives masterclasses on script-writing.

In his interview with Jeremy Kay promoting My Brothers, he explains how he cast for his films, explaining that Twenty Four Seven was the first project where he and Meadows could pay their friends for the acting they did. From this point on, they always decided to cast newcomers to acting.

This interview has inspired me to watch a lot more of films that the pair share in their filmography. The production behind their films follows an ethos that falls in-line with how I liked to produce Deadline, and I think using them as inspiration and research will really help my process. 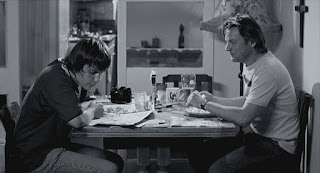 Somers Town was funded entirely by Eurostar in correlation with the renovation of St. Pancras Station, which features in the film. The film is mainly set in Phoenix Court, where Marek lives with his father. The boys also help a man who lives in Phoenix Court called Graham (Perry Benson) with selling his wares.

As the film is shot in the actual location that it’s set, this solidifies the realism of the film that is a key feature throughout. I also appreciate the sets within Marek’s flat as it’s cluttered, in a realistic way. This makes the shots appear as though you’re peering through a window into someone else’s life.

Fraser’s work on the script clearly demonstrates his ability to recreate natural conversation, which is more difficult than it sounds. This is something that I definitely want to experiment with in this project.

I appreciate how the plot doesn’t try to fall into any categories as such- it just tells a simple story that is deepened by it’s realism. The viewer may recognise their own childhood in the characters. 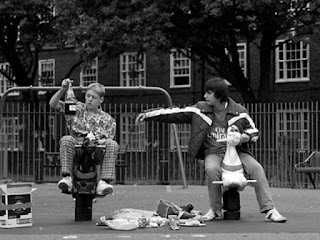 The film was shot mostly in black and white, which allows the viewer to separate themselves from what they’re seeing and focus on the story. The only colour segment of the film is when they travel to Paris, and this is filmed with a hand-held camera which gives the impression that they filmed this themselves.This also punctuates the part of the film where the mood changes for the pair and they get to be reunited with the French waitress.
The camera is also handheld. This adds an element of realism and makes the film feel less formal and more organic.
This is accentuated with the editing. The same shots are held for a long time and the pace is set more by the action on-screen than the editing. There is less focus on the presentation of the film and the audience notice less of the production of the film.
Having said this, each shot is carefully executed and designed to create a separation between the viewer and the subjects of the shot. A lot of the shots are long shots, which I believe to represent the initial distance between Tomo and Marek, as although they’re friends, they don’t know much about each other. The shots get closer, more personal, and more obviously handheld when they reach Paris as this is the point at which things get better for the pair.

I’m particularly inspired by this film because of the style and aesthetic. I want to be able to produce a film that has a similar realness and impact on the viewer. I want to work on characters that reflect the viewers as this has been the films that I have enjoyed the most personally. I also like this film because of its smaller audience which makes the film feel more exclusive.

Fargo Season 4 Cast and Creator on Its Wild Unpredictability