Last April, the Human Rights Watch stated that the conditions in which El Salvador inmates live are inhumane. El Salvador’s prisons have a maximum capacity of just over 18,000 prisoners, but they are currently holding more than 38,000 individuals. Upon entering the penitentiary, you will notice thousands of individuals trickling out of cramped cells. Gang violence in El Salvador has been steadily increasing over the last decade, reflected within the prison system. The majority of inmates are former or current gang members. In response, prison guards have begun donning themselves with balaclavas as they patrol the area as a means to shield their identity, so their families will not be targeted by the inmates. Prisoners in isolation endure extreme and unsanitary surroundings temperatures as the isolation cells, separated from the general populations’ cell blocks, are outside. The current state infrastructure has led to an increased tuberculosis rate. Unforgivable is the acclaimed documentary, directed and produced by Marlèn Viñayo and Carlos Martinez, that explores El Salvador’s prison system.

For the last year, Unforgivable has been fiercely powering through the festival circuit, collecting nominations and awards as it goes. The film is an incredibly unique look into the nuanced lives of former gang members and their experiences, which has since been attributed to praise across the Americas, Europe, and Asia. Slamdance, a film festival focused on emerging artists, is currently screening Unforgivable as a part of their 2021 Documentary Short category.

Inside one of the cells of Gotera Prison.

The journey to creating Unforgivable began in 2019. Viñayo and Martinez were given exclusive access to San Francisco’s Gotera prison, located in western El Salvador and exclusively functioning as housing for gang members, where they filmed for twelve days. Viñayo and Martinez spent 8 hours each day inside a 3′ by 6.5′ cell with 9 additional men. The result was indeed a fly-on-the-wall experience as an intimate portrait of prisoners materializes before your eyes. While Viñayo didn’t specifically provide any instructions or guidance for what the men should do, she captured raw conversations and emotions from gang members that we may never have known otherwise.

The film opens inside the cell as we watch inmates smiling, feeding one another with food by the spoonful, laughing amongst themselves, flipping through a magazine, exemplifying the true beauty of community and the importance of human connections. We soon find out this particular cell is housed with 9 former gang members who are also openly gay. Geovany, the film’s protagonist, is seen sitting on the ground sewing an outfit. As he sews, he explains, at 11 years old, he was brought into the gang to kill. Geovany describes the horrific crimes he has committed, eventually disclosing that he believes it is easier to kill a man than to love one, as that loving another man is not natural.

Gotera believes the recent installation of the Evangelical church within the prison walls has allowed many men to experience the unwavering forgiveness of God as they continue to leave their gangs and seek out reform. However, while God may forgive them for their crimes, their gay identities are considered unforgivable. Geovany is seen wrestling with his violent past, budding religious identity, and sexuality alongside his boyfriend, Steven. While the two lay together, kissing and entangled in one another’s legs, they begin mulling over Geovany’s recent request to transfer to another prison. If his transfer is approved, Geovany will be sent to a prison with a special section for LGBTQ+ inmates but will likely never seen Steven again, as Steven has chosen to stay at Gotera. 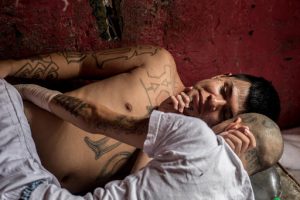 While the film does anything but sugarcoats the reality of an El Salvadorian prison, we see glances at the spontaneous activities the men engage in: making crafts, playing chess and card games, and discussing the choice outfits they see in a magazine. When we leave the cell, our escape is to church services, where we witness the collective shame and self-hatred put on LGBTQ+ individuals. Being publicly condemned and dehumanized further isolates the men and instills the idea that they should be ashamed of themselves for their sexuality rather than acknowledge the violent crimes committed against their community.

Viñayo and Martinez are anticipating the controversy that will spark when the film is shown to Salvadorian audiences. They explain that the continuous violence makes it nearly impossible for individuals to sympathize with gang members. As the Evangelical church continues to grow in popularity and spread the message that LGBTQ+ identified people live in sin, it causes further violence and discrimination within the community.

Most documentaries encourage the divide between the incarcerated and those that aren’t – often filming interviews looking into the cell, presenting a literal barrier and otherness to those within. We begin to observe them and their behaviors, like looking at animals in a zoo, as shocking and inhumane and denied context to who these people are. However, filming inside the cell with hand-held cameras removes the barrier, and we can humanize them as their thoughts become tangible and relatable. We can often see various aspects of ourselves within these prisoners. Unforgivable presents audience members with the opportunity to sympathize with someone who is incarcerated. There is no doubt that all of these men have committed horrendous crimes; however, now we can see the internal turmoil, self-hatred, disgust, and hope for redemption that goes on inside of the cell. The film offers a brilliant juxtaposition of the prison system that the “monsters” we lock away and ever look back on have also lived vulnerable and nuanced lives. There is no hidden agenda in this film; instead, Martinez hopes the raw, honest, and complex film will cause you to question the “moral compass” of society where the passionate disgust against homosexuality can be seen and criminalized the same as those who commit murder. Martinez further explains that the film is a balance of love and violence, as a means to have the audience members determine how they feel, instead of enduring what the director hopes for them to experience. Martinez, admittedly, is unable to figure out how he feels towards them. 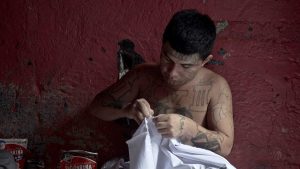 These stories are as powerful as they are priceless. Geovany and Steven, as well as their cellmates, have been given a rare opportunity to tell their story for themselves, with the power to share what they feel is and isn’t essential. Any reasoning that we might have convinced ourselves that it is okay to dehumanize the ostracized is a direct reflection of the system that placed them there. I often remind myself of the irony that it was only upon their arrest that these men began to live freely and openly as themselves, without assuming that they would be facing a torturous death by a fellow gang member based on their sexuality.

Instead of being shocked that there is a life behind the crime, be surprised that we are indoctrinated to believe that they don’t deserve to share who they are. Their lives have lost all meaning on the other side of the cell. Films are the bridge to humanity. We are given such a rare view of a world that we may never experience again, rather than sitting through a typical film that continues to denounce and belittle inmates’ existence. This is where the change happens. This is where we must be brave enough to extend ourselves and offer empathy to those who we have been told that their lives have no meaning. What do they gain? How are prisoners expected to grow and rehabilitate if all we do is diminish their experiences? What do we as a society gain from erasing others’ lives, forgetting that they too came from families just like ours? What justice is gained when the denial of humanity on another human is granted?

The post The Vulnerability of ‘Monsters’ in “Unforgivable” appeared first on Independent Magazine.

Decades Later, Rob Lowe Is Still Confused About Something Brendan Fraser Did On SNL

The making of ECHO by Lieke Bezemer

The making Of Thread and Almonds by Rebecca Manley

The Amazing Adventures of Awesome by Allison Brownmoore